American Campus Communities: What You Need to Know

Despite the underperformance and near-term headwinds, modernized and purpose-built student housing is still a compelling growth opportunity, and American Campus Communities could still be an excellent long-term investment.

With that in mind, here's an overview of what American Campus Communities does, its long-term growth plans, and how it's performed for investors so far.

American Campus Communities was founded in 1993 and went public in 2004. Since that time, the company has grown from 16 communities to a portfolio of 166 student housing communities in 69 university markets, with a total of 111,900 rentable bedrooms. The company focuses on large, public universities. Just to name a few of its largest markets, American Campus Communities has a large presence at Arizona State University, University of Texas at Austin, Drexel University, and Northern Arizona University. Nearly all properties are located within a half mile of campus.

In a nutshell, student housing was an industry that was just asking to be disrupted, especially in the roughly 70 university markets the company targets. Students traditionally had two options when it came to housing -- they could live in the on-campus dorms, which are over 50 years old, on average, or they could rent an apartment or house off campus.

Obviously, there are problems with both approaches. On-campus housing options are typically lacking in amenities and modern technology infrastructure. And privacy is a major issue -- many on-campus housing units are structured as shared bedrooms, and those that aren't tend to be significantly more expensive than living off campus. And off-campus housing (rental houses and traditional apartment communities) aren't built with students in mind. They often aren't well-designed for roommates, for example, and lack some of the amenities college students want. What's more, students generally want to live with other students.

That's where purpose-built student housing communities come in. American Campus Communities builds apartment complexes designed for college students. Units have private bedrooms, and properties have student-focused common areas and other amenities. And they offer this at an attractive price point -- in fact, the average monthly rent per bedroom in one of the company's properties is more than 20% cheaper than the average private on-campus bedroom and is roughly the same price as a shared room in the dorms. Think about the competitive advantage this gives the company. This is like if you ran a car dealership where you sold brand new cars, and the primary competitor in town sells heavily used cars for the exact same price.

American Campus Communities grows through a combination of acquisitions and developing communities from the ground up, with a preference for the latter. This combination allows the company to take advantage of the superior return potential of development while quickly establishing a strong presence in desired markets.

As the COVID-19 pandemic spread across the United States, it was very disruptive to colleges and universities. Virtually all higher education institutions in the U.S. shut down in-person instruction for the remainder of the Spring 2020 semester, and while many have reopened, some haven't and others are using a hybrid instruction model.

Obviously, all of American Campus Communities’ target universities closed as the pandemic worsened. However, the effect on the business wasn't terribly strong, since the overwhelming majority of the company's leases start in the fall semester. Nearly 94% of residents made their rent payments during the second quarter of 2020, a pretty impressive rate considering the broad campus closures.

What's more, the leasing numbers for the fall 2020 semester look strong. As of mid-September, the company's portfolio was 90.3% leased for the 2020-21 academic year. This was significantly lower than the 97.4% same-store occupancy rate at the same time in 2019 but is quite strong considering mid-July was in the peak of the daily virus numbers in many of the company's university markets. And with many colleges announcing closures for the Fall semester only, American Campus Communities could potentially get a surge in leasing activity midway through the school year.

So, while American Campus Communities hasn't exactly been unscathed in the pandemic, the effects (so far) on the company's business look quite mild. Throughout the company's history, it has done an excellent job of maintaining a 97.5% average fall occupancy rate and has steadily grown its average rental rate over the years. Plus, its revenue stream has held up quite well during recessions. I have no reason to believe any of that will change anytime soon.

Even though American Campus Communities' stock price has taken a beating during the COVID-19 pandemic, the long term performance has still been impressive. 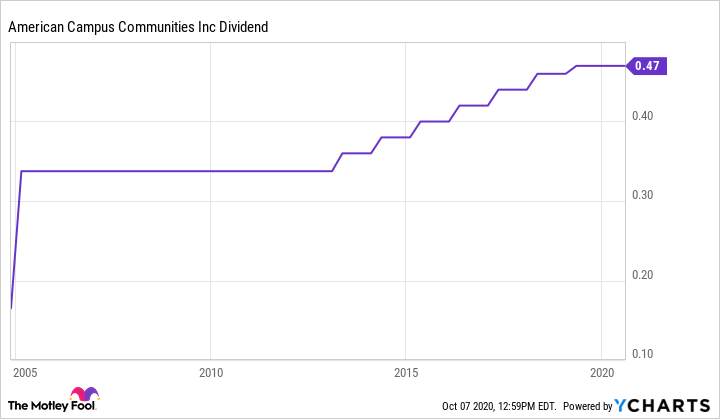 The student housing industry is still relatively young, with purpose-built student housing making up less than one-fourth of the housing supply in the company's 68 university markets. And the type of communities American Campus Communities develops essentially sell themselves -- the on-campus options consist primarily of dormitories over 50 years old without modern technology infrastructure or the amenities today's college students want. What’s more, the average rent per bedroom in one of the company's communities is actually cheaper than a private bedroom on campus.

The bottom line is that this is a huge market opportunity that's still in the early stages of growth. And as the most experienced and largest player in the industry, American Campus Communities is well positioned to deliver excellent returns for years to come.