The U.S. Spent More on Industrial in 2020: Will This Trend Continue?

After a wildly unpredictable year marked by pandemic lockdowns, nonstop COVID-19 reporting, and murder hornets, it was hardly surprising to learn that U.S.-based investors spent more money on industrial real estate than commercial in 2020. After all, it was the obvious choice for anyone who was paying attention.

An enormous influx of people (71% of those whose jobs could be performed remotely) joined, even if temporarily, the ranks of those working from home. And, according to the U.S. Census Bureau, almost 93% of kids participated in some form of distance learning. It felt unsafe to go to the market or even around the corner sometimes, which led to a massive increase in e-commerce retail (as much as 43.8% year over year!), as well as other forms of delivery-based commerce.

So why wouldn’t a smart investor drop their dollars into as much industrial real estate as they could find? After all, those new data centers, distribution centers, warehouses, and other moving parts of the supply chain weren’t going to build themselves. Outspending commercial with industrial last year was an absolute given.

Even as COVID vaccinations were rolling out across the country, industrial real estate remained a strong investment. In April, the National Association of Realtors reported that closed transactions for industrial warehouses under $2.5 million showed strong price gains of approximately 5% year over year. The only values that outperformed industrial warehouses were for land, which have been pushed through the roof as demand for all classes of new construction continues to create a serious land rush.

The same report found that although office vacancies continued to rise throughout the first quarter, industrial spaces were increasingly occupied, adding another 82.7 million square feet of working space during the first quarter of 2021. Not only are those spaces being rented at a higher rate, they were being built faster. During this period, industrial warehouses saw a 12% year-over-year gain in new construction square footage, despite troubles in obtaining building supplies, hiring workers, and delays with obtaining permits.

And, even before the resurgence of COVID-19 in the interior of the United States, NAR commercial members expected industrial warehouses and flex space to take the No. 2 and 3 spots among gains in sales volume for the following year (only outranked by land sales). A July followup by NAR continued to show increased growth in industrial construction year over year for Q2 and predicted continued demand for industrial space moving forward due to shifts in e-commerce.

COVID resurgence: a wrench in the works?

Unfortunately, all of the data we have to this point is based on a rosy picture of a straightforward recovery from the pandemic. We expected that people would be lining up for their COVID-19 vaccines, ready to get back to work and life and traveling and buying stuff in stores. The reality we experienced in the United States was very different.

New England and a large portion of the East Coast did exactly as expected, with vaccination rates of upward of 74.9% (Vermont) as of the writing of this article. California, Oregon, and Washington are hovering around 60% fully vaccinated. The rest of the country? Well, it’s not as good. The Midwest and the South are not faring as well, with a great deal of vaccine resistance leading to rates as low as 37.7% (Mississippi), according to reporting by the Mayo Clinic.

Major hot spots are also emerging in Southern Missouri, Northern Arkansas, and across low vaccine-compliant areas. And because a large percentage of these cases are known to be caused by the delta variant, it’s spreading rapidly among the unvaccinated.

But vaccinated or not, masking and isolation are almost certainly once again on the horizon for so many of these vaccine-hesitant areas. Although many of these states are small and sparsely populated, population-heavy states like Texas are still seeing sub-50% vaccination rates.

What’s the point of all of this? Industrial was a good buy last year -- the data is clear. But what’s less clear is what that spells for 2021. I think that as we creep closer to fall, with a powder keg of COVID cases just waiting to explode across the country, industrial space is going to continue to reign supreme.

That space will be vital to housing data centers that will keep those people for whom the pandemic really never paused connected to work and the outside world. It’ll be important for distributing goods that will be ordered from fulfillment centers, as too many people continue to juggle work from home and potentially act as home-based tutors for their children for yet another year. It’ll be vital for storing pet supplies for all the new pandemic pets and medical supplies for yet another round of this seemingly endless battle with COVID-19.

Industrial has long been a neglected sector, but it continues to be critical. In plague times, having adequate storage and distribution facilities could not be more important, whether what's being distributed is digital or physical. Industrial real estate isn’t sexy, but it’s vital, and as the pandemic continues on unrelentingly, it’s needed like never before. 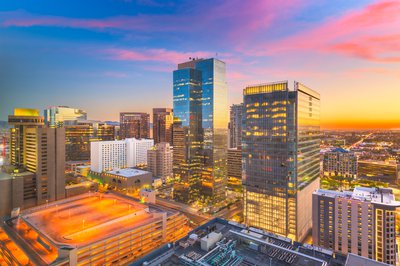