But the city has come a long way since March 2020. Now, with coronavirus vaccines being widely available to the public, the city is planning to reopen in full beginning July 1. And that's extremely good news for real estate investors.

A step in a positive direction

New York City Mayor Bill de Blasio has announced that come July 1, the city will be fully open for the first time in over a year. This means that restaurants, retail stores, hair salons, and gyms can welcome back customers at full capacity. Similarly, smaller theaters could reopen by summertime, and Broadway is slated to come back in September. Schools, too, should be back to full-time in-person learning by the start of the fall semester.

As of April 28, more than 6 million coronavirus vaccine doses had been administered in the city, and about 36% of the city's adult population is considered fully vaccinated. Meanwhile, more than half of New York City's adult population has received at least one vaccine dose. The plan is to continue vaccination efforts at full speed to make a full reopening a safer prospect by July.

Now one thing that hasn't yet been determined is whether masks will continue to be a requirement in New York City, and in what capacity. But either way, this news should be very encouraging to real estate investors.

For one thing, if local businesses are able to open in full, that alone will help them boost their revenue. The result? Fewer closures, which commercial landlords can't afford coming off of a horrendous year during which so many businesses shuttered.

Opening up the city is also great for tourism. Many New York City hotels have seen their revenue take a major hit over the past year, but with restrictions lifted, travelers may be far more eager to visit the city -- and not only book hotel rooms, but spend money at local businesses and retailers to boost their revenue as well.

The news is also positive for office buildings, which have largely sat vacant since the pandemic began. With the city opening back up, employers should have an easier time coaxing workers back to the office. And once that happens, local businesses that traditionally rely on office crowds should see an uptick in foot traffic.

Investors, get in now

In fact, investors with room in their portfolios may want to consider buying those REITs now -- before they stage a full recovery and become more expensive to acquire. 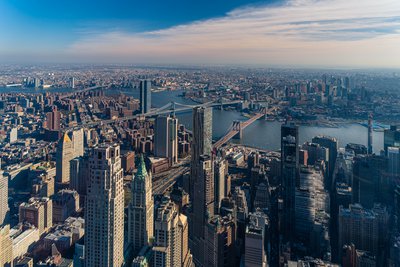