The Census Bureau released its latest residential construction data, and the results seem a bit dreary. According to the report, housing starts were down a whopping 10.3% in February -- nearly double the dip seen in January.

The multifamily sector saw the biggest decline, with starts falling 15% (despite a 29% surge in January). Single-family starts dipped 8.5%.

But what does it all mean? Were the drops just blips on the radar, or are they an indicator of an overall market slowdown? Let’s dig in.

Experts say a decline in construction was largely expected. A big reason was that big Texas storm back in February. With widespread power outages, extremely cold weather, and many businesses shut down as a result, construction slowed considerably in the region. Unfavorable weather in the North kept construction numbers low there, too.

Building costs, material shortages, and other external factors are also playing a role in the overall slowdown. According to the National Association of Home Builders, lumber prices -- which are up a shocking 180% since last spring -- are adding a reported $24,000 to the cost of new homes.

Said Chuck Fowke, NAHB chairman, in a press release: “Despite strength in buyer traffic and lack of existing inventory, builders are slowing some production of single-family homes as lumber and other material costs, along with interest rates, continue to rise. Shortages of lumber and other building materials, including appliances, are putting future construction expansion at risk."

So construction was down for a month. Does it spell a trend?

Probably not. Overall, construction numbers are still up over the first two months of 2020 (by more than 6%), and they’re still on pace to clock in well above 2019’s annual average (an annualized pace of 1.3 million in 2019 versus 1.42 million now).

With permits up 36% over the last year, a steady stream of construction is in the cards -- especially once the weather warms up. As Fannie Mae's Duncan explained, there should be a “near-term bounceback in single-family starts over the coming months.”

Robert Dietz, NAHB’s chief economist, put it best, saying, "Single-family home building is forecasted to expand in 2021 but at a slower rate.”

New home construction definitely declined last month, but it’s not necessarily a sign of any larger trend just yet -- especially with recent weather and cost concerns.

Plus, with housing inventory extremely low, it’s likely demand for new construction will remain high -- at least until mortgage rates become unattractive (or at least less attractive) to buyers. Should that happen, it could tamp down price growth and make buying that new investment a little more affordable. 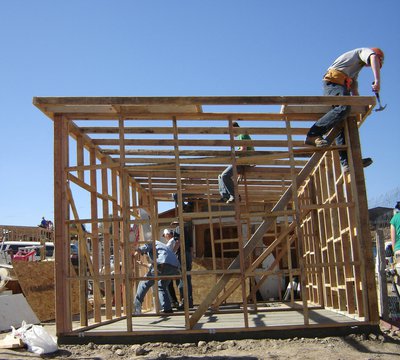