Are your REITs paying you enough in dividends? Here's how to know -- compare dividend yields to Treasury yields.

One of the simplest ways to value a REIT is based on its dividend yield relative to alternatives. Because REITs are a yield investment by definition -- REITs have to pay out at least 90% of their income as a dividend -- comparing their yields to the 10-Year U.S. Treasury is a good way to understand their relative valuation.

I found some historical dividend data for a popular REIT index and compared it to historical U.S. Treasury yields over the last 15 years. Not surprisingly, REIT dividend yields have largely kept a tight spread to risk-free yields, with REITs offering 1.28% more annual yield on average. 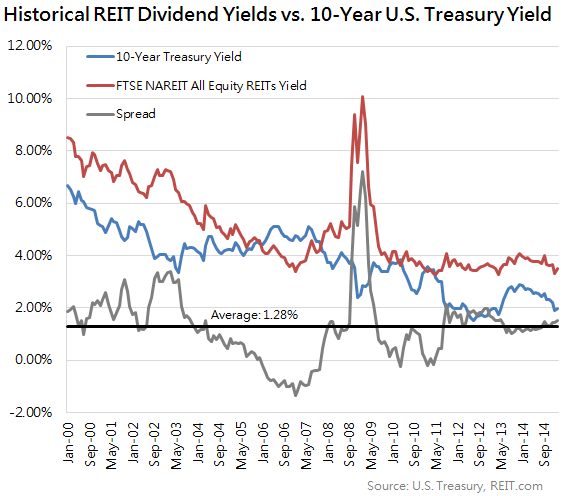 Of course, there were booms and busts. During the years 2004 to 2005, the general view that real estate was a great inflation-protected investment that couldn't go down in value led many investors to overpay. Dividend yields fell below the yield on U.S. Treasuries. The potential for capital gains blurred the reality that, over the long haul, real estate is all about cash flow.

Interestingly, in 2010, everyone who wanted out of the real estate game through the financial crisis was happy to buy back into REITs, hoping to take part in a recovery in real estate values. REITs as an industry would have one of their best years in 2010, thanks to robust price appreciation. Spreads briefly went negative.

The next year, 2011, was the year of "Operation Twist." REIT spreads went negative again, as investors thought that long-term yields would drop considerably, short-term yields would increase, and maybe, just maybe, the yield curve would invert. It didn't, but it was a legitimate concern at the time. Not surprisingly, REIT returns were minimal that year as spreads reverted to finish the year. Starting from wide spread in 2012, investors who bought in then would have ridden the industry for another year of impressive capital gains and fat dividends, to boot.

How to use the spread to value REITs

There will be fluctuations, fears over monetary policy, and imperfections in any valuation metric, but having some sense of what you should earn for taking a little more risk with REITs over 10-year Treasury yields can give you some perspective on valuation.

When REIT spreads are negative, and the yield curve isn't inverted, it's a clear sign that investors are banking on capital appreciation and robust growth, not current and measurable income, to drive returns. Over the long haul, that's a clear sign of "irrational exuberance," to borrow a phrase from Alan Greenspan. Earnings drive real estate prices; real estate prices do not drive earnings. The industry has a mechanism for correcting fast-growing rents; construction explodes, and new capacity puts a damper on rent growth.

When the spread is positive, and well above its historical norm, it may be a sign that REITs are undervalued. Spreads peaked during the brief 2002 recession and then later during the financial crisis. With the benefit of hindsight, it's easy to make the call that REITs would have been spectacular investments at the time.

Speaking about when to buy and sell in hindsight isn't my goal. Rather, I want to show that with a simple look at historical spreads, you can have a "tool" to give you the confidence to buy when there is blood on the streets and avoid the sector when it becomes overheated.

Knowing only that spreads were particularly beefy in 2002 or 2008-2009, and without letting the doomsday scenarios affect your decision, a rational buyer would have seen the opportunity to invest at some of the highest spreads in recent history -- investments at either time would have panned out fantastically. So much could go wrong, and you'd still net out a better-than-average return -- a true margin of safety.

Likewise, knowing only that spreads during the real estate boom years were thin, and that capital appreciation, not dividends or cash flow, would have to drive returns, you may have very likely turned away from the sector, which would have been a very, very good decision.

And while some of you may leave this article with the perception that I'm suggesting you try to time the market, that isn't my intention. Ultimately, one of the most important and visible variables in long-run REIT returns is the current dividend yield -- everything else should be assumed as pie-in-the-sky. Wait for a fat pitch in current yields, it will come, and dividend spreads over U.S. Treasury yields can help you identify it as it nears the plate. 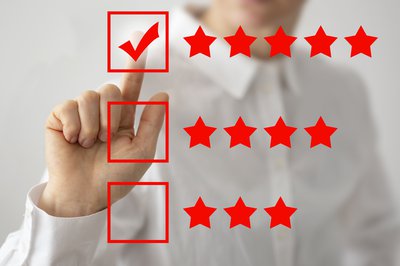 1 Empty Sears Is Becoming a Dining Hub. Will More Follow? 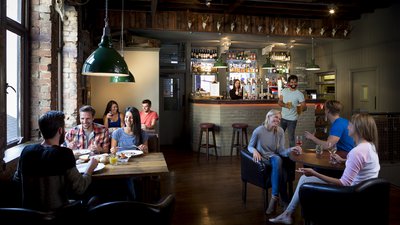