Public Storage REIT: A Market Leader in a Recession-Resistant Industry

The self-storage business could be a great place to invest, and Public Storage has a dominant lead over its competition.

Self-storage is a unique type of commercial property. Although tenants are on extremely short (month-to-month) leases, storage space is always in demand and the economics of operating a self-storage facility are extremely favorable.

There are a handful of publicly traded self-storage real estate investment trusts, or REITs, but none come close to the scale and brand recognition of Public Storage (NYSE: PSA). The company is several times larger than its nearest competitors, and most Americans can immediately recognize the company's orange-colored storage facilities.

With that in mind, here's a closer look at Public Storage's business, how the company has been performing recently, how it plans to grow going forward, and the performance and income it has delivered for investors over the years.

Public Storage is the largest and most well-known real estate investment trust, or REIT, that focuses on self-storage properties. At the end of 2019, Public Storage owned almost 2,500 storage facilities in the U.S., had an interest in 234 properties in Europe through its Shurgard joint venture, and also partially owned 97 business parks in the U.S. (Note: The company owns 35% and 42% of Shurgard and PS Business Parks, respectively.)

In all, Public Storage owns or has an interest in 2,814 properties with more than 209 million rentable square feet, which serve a total of 1.5 million customers. With a market capitalization of $35 billion, Public Storage is one of the largest REITs of any kind and is larger than its three closest competitors combined.

Self-storage is one of the more recession-resistant types of commercial real estate. While self-storage tenants are typically on month-to-month leases, they tend to stay put for long periods of time as many have a need for storage space and switching facilities can be a hassle.

What's more, the economics of the self-storage industry provide tremendous cushion in tough times. Self-storage facilities have relatively low staffing requirements and maintenance expenses. And Public Storage's rock-solid balance sheet adds to this safety. The company has an extremely low debt load compared to most other REITs, plus it has low borrowing costs thanks to its A2/A credit ratings from Moody's and S&P, respectively (Note: Only two REITs in the U.S. currently have this credit rating.). Even if we include preferred stock in the calculation, debt makes up just 15% of the company's total capitalization. This allows Public Storage to run a more profitable operation than most -- according to CEO Joe Russell, Public Storage's same-store operating margins are 500 to 1,000 basis points higher than its competitors.

In fact, Public Storage has previously said that it could break even with just 30% of its space rented. At the end of the second quarter of 2020, Public Storage's occupancy rate was more than 94%. That's a big margin of safety.

Public Storage grows through a combination of development and acquisitions. In 2019, Public Storage acquired 44 properties at a total cost of $430 million and also spent $379 million in 11 new developments and 29 redevelopments of existing storage facilities.

In recent years, the self-storage business has experienced a difficult operating environment, and the major reason why has been oversupply issues. Simply put, it has been more economical for operators to simply build a new storage facility than acquire an existing one, as self-storage facilities can be very inexpensive types of commercial properties to construct. In fact, the volume of new self-storage properties built in 2018 alone was more than was built in 2010 through 2015 combined.

This has created an unfavorable supply/demand imbalance in many of Public Storage's core markets, which has put pressure on pricing power and has driven the company's marketing spending higher. To be sure, the company's brand power and the efficiencies of scale give Public Storage a competitive advantage, but this has still weighed on the company's results. But to be clear, revenue continues to grow -- just a bit slowly.

The challenging environment of the past few years aside (which should be a temporary issue), Public Storage has a strong track record of growth. Over the past decade, Public Storage has grown its free cash flow at a 7.5% annualized rate and core funds from operations (FFO, the REIT version of "earnings") grew at a 7.9% pace.

Going forward, the recent oversupply issues that have been a headwind for the industry could end up being a positive catalyst for Public Storage. As CEO Joe Russell said in the company's 2019 annual report, "Many developers who wanted to 'get in' a few years ago are now eager to 'get out.'" This is creating attractive acquisition opportunities and could continue to do so for years to come. Self-storage real estate is a highly fragmented industry, with most properties owned by either smaller companies or individual operators, so there's no shortage of potential to expand.

Now, Public Storage hasn't been completely immune to the effects of the COVID-19 pandemic, but the impact has been rather minimal. Fewer new tenants moved in as the pandemic hit, but at the same time, fewer moved out as well. In fact, the company's second-quarter occupancy was higher than it was at the end of 2019, although same-store rent declined by a modest 2%. Core FFO declined by 6.8% in the second quarter, which is a mild decline for what's likely to be the worst impact of the pandemic, and was still more than high enough to sustain the dividend.

Public Storage has done an excellent job of steadily growing revenue over the years, which has translated into excellent dividend growth and total returns for investors. The company's dividend has grown by more than 800% over the past 20 years, and while the payout hasn't increased every year, the company hasn't cut its dividend, even during the Great Recession or the COVID-19 pandemic. In fact, Public Storage has sustained or grown its dividend for 157 consecutive quarters.

In that same 20-year period ending in August 2020, Public Storage has generated total returns (dividends plus stock price gains) of 1,550%, which is about 15% annualized. In contrast, the S&P 500's total return over that same period has been about 281%. Let that sink in for a minute -- Public Storage, which many investors consider a "boring" business -- delivered returns more than 4.5 times that of the overall stock market. Investors who put $10,000 into Public Storage in 1999 would now have more than $165,000, assuming dividend reinvestment. 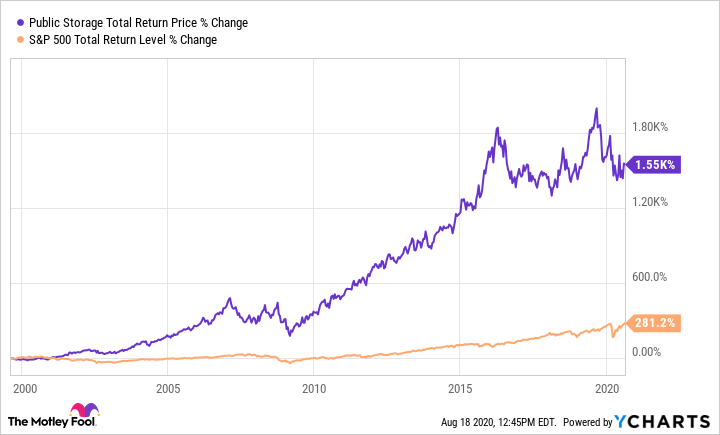 Public Storage has historically been a strong dividend payer. While the dividend yield obviously varies as the stock price changes, the company's yield has been in the 4% ballpark for much of the past few years.

The bottom line on Public Storage

To be fair, there are several well-run self-storage REITs to choose from. However, Public Storage is the largest and most recognizable name in the business and has the competitive advantages to go with it. And, no other self-storage REIT has the balance sheet and credit quality of Public Storage. While I'm not necessarily convinced that the performance of the next 20 years will match that of the previous 20 for Public Storage, this is a stock that should produce a growing income stream and excellent returns for decades to come.