When the coronavirus pandemic first hit, New York City was flagged as its epicenter. Not only did the city shutter during the early part of 2020, but in the months that followed, countless residents also fled the city in search of open suburban spaces (and more affordable ones to boot).

Now that the city has largely reopened, the demand for residential rentals and homes is steadily picking up. But commercial space in New York City is a different story.

Many Manhattan retailers were forced to shutter during the first part of 2020, and now, getting them to re-sign leases is a challenge. Meanwhile, Manhattan's office buildings have largely been sitting vacant since February or March of 2020. Plans to bring workers back to the office were inevitably postponed when the delta variant struck over the summer, so commercial properties are still sluggish despite the city's reopening.

It's not surprising, then, that one REIT, or real estate investment trust, is selling off a chunk of its Manhattan holdings. And the fear among real estate investors is that more REITs could follow suit -- and lock in losses in the process.

Vornado Realty Trust (NYSE: VNO) announced in late August that it would be selling off five underperforming retail properties in Manhattan for $185 million. Those properties include three buildings on the Upper East Side and two in SoHo.

At the time of the announcement, the properties all had negative income, and their retail portions were only 30% leased. The sales are expected to leave Vornado with a loss of $7 million.

Is Vornado in trouble?

Yes and no. Vornado has a fairly diverse portfolio, which could help it recover from the aforementioned loss.

At the same time, Vornado is heavily invested in New York City. And as we just learned, that's a precarious market even at a time when the city itself is undergoing a revival. What's also concerning is that a substantial chunk of Vornado's portfolio is in office buildings -- namely those concentrated in Midtown Manhattan. And given that companies aren't anywhere close to bringing employees back on a full-time basis, that doesn't bode well.

Yes and no. Recently, Manhattan apartment sales reached a 30-year high, and with nightlife reopened, things are looking up for the city's restaurants and hotels. But some commercial buildings could remain sluggish well into 2022, and that extends to those that house retail establishments as well as corporate offices.

Of course, much of the fate of New York City real estate will hinge on the trajectory the pandemic takes over the next few months. While COVID-19 cases have dropped in recent weeks, health experts fear a wintertime surge is more than possible. And it's too soon to know whether an uptick in vaccination rates coupled with booster shots will do the trick of nipping the outbreak in the bud.

In time, New York City's commercial real estate market should manage to stage a recovery. But we could still be a ways away from that milestone. 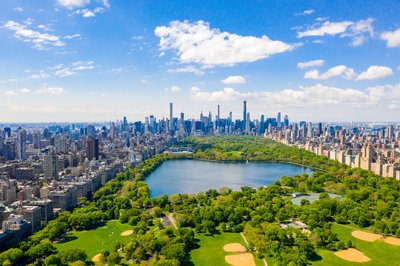