Top 3 REITs to Buy With Dividends Above 7%

There are a lot of things that make real estate investment trusts (REITs) a great investment, and somewhere at the top of that list is the dividends. While dividends can vary widely between them, some REITs have a much more attractive payout than others.

We’ll look at the top three REITs to buy right now that have dividends above 7%. Iron Mountain (NYSE: IRM), MGM Growth Properties (NYSE: MGP), and National Healthcare Investors (NYSE: NHI) don’t only pay out dividends above 7%, but also appear to have a bright future ahead of them.

A lot of people recognize Iron Mountain as the paper shredding and document storage company that’s been around since 1951. However, the company has been expanding their storage business from their physical secure storage to data storage across their growing portfolio of data centers.

With their long history, Iron Mountain has built an impressive customer base of some of the world’s largest organizations. This puts them in a great position to win over their current customers’ data needs as well.

While their core storage business remains strong, and continues to grow, they’ve also been picking up steam on the growth of their data storage business. During the first six months of 2020, they had new and expansive leases of 39 megawatts, 32.3 of which were just in the second quarter. They also expect an additional 10 megawatts being leased in the second half of 2020. While this may not sound like a lot compared to the large data center REITs, it blows their 2020 guidance of 10-15 megawatts out of the water. This shows a lot of promise in the growth of this new business model.

Iron Mountain might scare some investors away with their high FFO payout and debt/EBITDA ratio. However, there is a lot of complexity to its financials since a significant portion of its revenue comes from its service business, which is known as a taxable REIT subsidiary. This means more of its income is taxable than with many other REITs. It also just converted to a REIT in 2015 from a C Corp.

Overall, I think a company with such a long-standing business, a core business that remains strong, the growth in additional data storage revenue, and a dividend of nearly 9% is a great REIT to bet on.

MGM Growth Properties owns real estate leased to casinos and resorts such as MGM (NYSE: MGM), Mandalay Bay, and other well-known brands. MGM Growth Properties’ portfolio is diversified throughout the United States with 48% being in Las Vegas along the strip. The company also has control of land along the strip that’s slated for future development.

The REITs recently completed an acquisition of MGM Grand and Mandalay Bay properties in a joint venture with Blackstone for $4.6B. MGM Growth Properties holds a majority interest in this joint venture, with 50.1%. The acquisition also comes with a master lease with an initial term of 30 years.

MGM Growth Properties has been consistent with growth since its IPO in 2016. It has completed $6.7B in transactions and has the pipeline and balance sheet to continue this growth. It holds the Right of First Offer on MGM Springfield, as well as the future Empire City development. Its 4.5x debt/EBITDA ratio leaves plenty of room in its balance sheet to finance more acquisitions or development projects.

The company's dividends have increased 31.5% since its IPO, and its current dividend rate of $1.96 puts its yield at just over 7%. The dividends should remain safe as its AFFO payout ratio of 87.5% has been similar in previous periods.

With MGM Growth properties’ consistent growth, growing dividend, healthy balance sheet, and the strength of the gaming industry, this REIT should continue producing an attractive income for investors for the long term.

National Health Investors has remained one of the strongest healthcare REITs throughout 2020. A major part of its strategy is sale-leaseback transactions, so its tenants have already been operating in the properties successfully. These leases are also triple net, which keeps revenue stable.

The sale-leaseback acquisitions are also done with some of the largest and most successful operators in the country. These operators have strong networks and referral sources.

The company reached its highest FFO and FFO per share in the second quarter of 2020, after five straight years of FFO and AFFO per-share growth. It has also raised dividends each year since 2013 from an annual rate of $3.12 per share to a projected $4.41 per share for 2020.

While its price is still down 27% YTD, it’s an excellent time to pick up this REIT at a 7.3% dividend yield. Especially since its been maintaining growth in their FFO and dividends.

It’s hard to not get excited when you see a REIT paying dividends of 7% or more. However, you’ll want to remain cautious before investing in high-dividend REITs to avoid investing in one that will have a hard time maintaining payouts. Be sure to check the payout ratio, and compare that to previous years to make sure it hasn’t reached a level that the company hasn't demonstrated it can maintain.

Also keep in mind that many of today’s high-dividend REITs don’t normally have as high of a yield on cost. For example, National Health Investors’ yield would only be 4.8% if you bought it back in February at its 52-week high. This makes it a great time to take advantage of these REITs and lock in the high returns while prices are still down.

Is Macerich in Trouble? 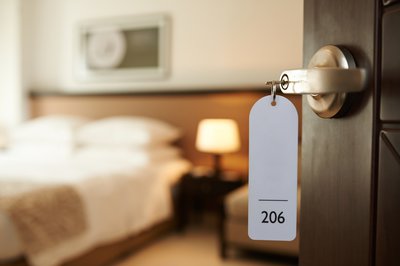 Is Host Hotels & Resorts in Trouble?