Howard Hughes (NYSE: HHC) is a developer of master-planned communities, and while it has invested heavily in its communities in recent years, the portfolio hasn't seen much geographic expansion in a few years. But that just changed.

Howard Hughes just announced that its next master-planned community, or MPC, will be in the Phoenix metropolitan area. And it's going to be a big one. Here are the details of the massive land acquisition Howard Hughes just made and details on what the company has planned for the future.

The Douglas Ranch community is born

Howard Hughes just spent about $600 million to acquire almost 37,000 acres of developable land in Phoenix's West Valley from JDM Partners, an investment group led by Jerry Colangelo and two others.

JDM Partners is remaining involved with Douglas Ranch, initially as partners on the first 3,000-acre village that is planned. However, the partners have an option to buy back a 50% interest within six months of the effective date of the deal.

Colangelo and his partners have been in the process of getting Douglas Ranch shovel-ready for some time and welcomed the opportunity to leverage Howard Hughes' development experience to see their vision come to life.

The Phoenix metropolitan area is the fastest-growing metro region in the entire U.S., with above-average job growth and housing affordability that many other markets simply can't match. It's also very pro-business, with low taxes, which makes it attractive from a commercial development standpoint.

Howard Hughes isn't wasting any time getting this new project started. The initial community in Douglas Ranch, known as Trillium, will consist of 3,000 acres, and residential land sales are anticipated to begin in the first half of 2022. Howard Hughes anticipates the new MPC will be cash flow-neutral immediately and will be accretive to cash flow once land sales begin next year.

Over time, Howard Hughes' management anticipates Douglas Ranch becoming one of the largest MPCs in the United States, with 100,000 homes and 55 million square feet of commercial space at full buildout. And when it comes to commercial development, Howard Hughes mentioned some property types it historically hasn't developed, specifically single-family rental properties and industrial real estate.

It's also worth noting that even after spending $600 million on the land purchase, Howard Hughes still has more than $850 million of liquidity, which gives it more than enough capital to pursue attractive opportunities within its MPCs as it sees fit.

To be perfectly clear, this is a big deal for Howard Hughes in terms of future growth potential. Just to put things into perspective, Howard Hughes is adding nearly 37,000 acres to its land bank and has another 10,000 or so from the rest of its MPCs combined. It creates tremendous possibilities when it comes to both land sales and commercial development.

It's also worth pointing out that Howard Hughes is paying roughly $16,000 per acre for the MPC, and it anticipates the first lot sales to occur at a price tag of at least $300,000 per acre. To put it mildly, buildable land sales can be a big, long-tailed moneymaker, especially as commercial amenities get built out and the surrounding land becomes even more valuable.

It's difficult to overemphasize how much I like this move by Howard Hughes. It gives the company a much-needed presence in the fastest-growing metropolitan area in the entire United States, and it does so with a massive blank canvas that allows the company to develop a MPC from scratch. 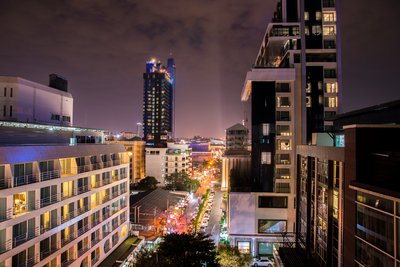