The travel industry took a major beating in 2020 as pandemic-related fears kept many Americans out of airports and hotels and close to home instead. In fact, 2020 was hotels' worst year on record for occupancy and revenue.

Things started looking up in the spring and summer of 2021 as more Americans got vaccinated and quarantine mandates were largely removed for domestic travelers. But then the delta variant struck just as summer travel was really heating up. And now, one airline is worried that it could really derail travel -- and hurt airlines and hotels alike.

Will travel come screeching to a halt?

The delta variant has caused a surge in COVID-19 cases throughout the U.S. over the past month, and its highly transmissible nature makes it a threat to the vaccinated and unvaccinated alike. Though vaccinated people are less likely to become severely ill upon infection, they can still transmit the virus to other vulnerable people, like unvaccinated children in their households. As such, many people may be rethinking their plans to travel during the latter part of 2021 -- not the news real estate investors with hospitality REITs (real estate investment trusts) in their portfolios want to hear.

Hotels need an influx of revenue to make up for the miserable year they just had. But based on trends reported by one airline, that may not happen.

Southwest Airlines (NYSE: LUV) is already seeing a decline in bookings in August compared to previous months. It's also seeing an increase in flight cancellations by travelers. In fact, the airline now says that despite a profitable July, it may struggle to turn a profit during 2021's third quarter due to the turn the pandemic has taken. Southwest thinks September operating revenue will be down 15% to 25% compared to September 2019, though it notes that Labor Day travel demand has, thus far, remained healthy.

Southwest isn't the only airline experiencing a decline in bookings. As of July 3, domestic air travel, as measured by tickets issued by U.S. travel agencies and online booking sites, stood at just 3% below 2019's levels, according to the CNN Business Economic Recovery Dashboard. But as of July 23, domestic air travel was down 22% compared to the same point in 2019.

None of this bodes well for holiday travel. Though we're months away from that season, it's a period airlines and hotels alike look to for added revenue. But if the trajectory of the pandemic continues on its current path, Thanksgiving and Christmas travel could decline substantially.

Compounding the issue is a lack of clarity as to when children under 12 will be eligible for a COVID-19 vaccine. Though some health experts have expressed confidence that shots will be available to children before the end of the year, they may not come in time to allow families to travel safely for the holidays.

All told, investors in hospitality REITs may need to accept the fact that hotels will not, in fact, enjoy the swift recovery they seemed poised for just months ago. And if things really take a turn for the worse, 2021's final occupancy and revenue numbers could end up dangerously mimicking 2020's. 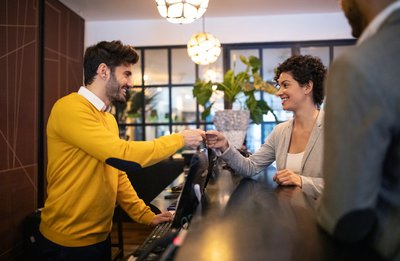 3 Hospitality REITs to Buy in August

Retail REITs vs. Hospitality REITs: Which Should I Buy Right Now?