JOANN to Go Public: Sew, What Does This Mean for CRE?

When I was but a wee lad, my mom, who was quite the seamstress and power knitter, would often get her stuff at the JOANN Fabrics store in our small community.

This was in the mid '60s or so, and we didn't get out much, so I remember being puzzled to see another JOANN Fabrics store in another town a bit up the road.That was my first exposure to chains.

This was in northeast Ohio, and JOANN Fabrics has grown to 855 stores in 49 states, with an e-commerce business that has helped secure its place as the category leader in sewing and "one of the fastest-growing players in the arts and crafts industry," as the company says of itself.

And now, 75 years after its founding in Cleveland, JOANN plans to go public, perhaps inspired equally by the surges in business by suddenly socially distanced do-it-yourselfers and in IPOs overall in a generally heated stock market.

On Feb. 16, JOANN -- interestingly enough now headquartered in a former GM (NYSE: GM) earth-moving equipment factory in the Cleveland-Akron suburb of Hudson -- announced it had filed a registration statement for a proposed initial public offering. If completed, JOANN intends to list its stock on the Nasdaq under the ticker "JOAN".

There's more. Joann's equity owners in the past had been pulling $5 million a year out of the firm, and although that dropped to $800,000, the company was put on Fitch's Loans of Concern list, according to this piece in Retail Dive about the IPO.

But if the stock sale happens, that new public ownership could create a level of transparency that could hold management fees down -- or at least a renewed imperative to turn a profit (and maybe even pay a dividend).

Just as importantly, if the initial $100 million referenced in the SEC filing is really a placeholder for a $400 million IPO, as the Retail Dive piece says, citing the IPO analysts at Renaissance Capital, this could be some significant investment in Joann's business, including perhaps more stores.

For sheer longevity and agility, JOANN as a business itself could bear consideration as a stock worth buying, but there's more to this yarn.

This IPO also could be good news for real estate investors. A fresh injection of cash could not only lend stability to the existing operation but lead to expansion, creating some new business for property owners and managers, including real estate investment trusts (REITs) of the retail variety and other holders of commercial real estate. 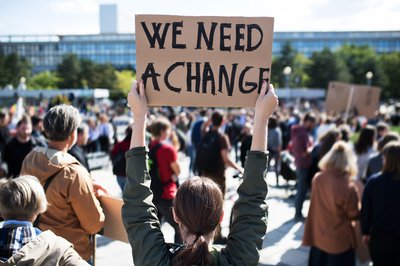