Office furniture company Herman Miller (NASDAQ: MLHR) recently announced that it would acquire rival Knoll (NYSE: KNL) in a cash-and-stock transaction. While this is definitely a significant move in the office furniture industry, it could have some implications for office real estate as well. Here's a rundown of what investors need to know about the transaction -- and what it could be telling us about office real estate in the post-COVID-19 world.

Between the two companies, they have a presence in more than 100 countries around the world as well as 19 leading furniture brands, generating annualized revenue of about $3.6 billion.

It's also worth pointing out that while the two companies are both leaders in office furniture, they both do specific things very well. For example, Herman Miller has the best-selling office chair in the world, and Knoll makes the "world's most recognizable table," according to Herman Miller CEO Andi Owen. So, it's fair to say that the deal will create a more diversified leader in the office furniture space.

Why is Herman Miller willing to spend $1.8 billion to acquire a rival?

There seem to be two big implications for the general office industry in this deal. First, Herman Miller is sending the clear message that they don't see demand for office furniture disappearing anytime soon. And this certainly makes sense -- most surveys have shown that employees want to work in the office at least some of the time; companies such as Goldman Sachs (NYSE: GS), JPMorgan Chase (NYSE: JPM), and Netflix (NASDAQ: NFLX) have said that they want their workers back in offices; and even several tech giants like Alphabet (NASDAQ: GOOGL)(NASDAQ: GOOG) and Amazon (NASDAQ: AMZN) have invested in expanding -- not reducing -- their office footprints.

Second, while office work will exist, Herman Miller believes the office of the future will look very different and that there will be a huge opportunity. As CEO Andi Owen said in a conference call, "As distributed working models become the new normal for companies, businesses are reimagining the office to foster collaboration, culture, and focused work while supporting a growing remote employee base. At the same time, consumers are making significant investments in their homes.”

In other words, signs are increasingly pointing to a hybrid work environment. Arrangements where employees work remotely some of the time and in the office some of the time will be the new normal. So, Herman Miller sees a wave of investment in restructuring in-person office environments to comply with not only social distancing guidelines but "remote-first" work arrangements as well, and also sees the increasing need for permanent home office setups, both of which are conducive to a rise in spending on office furniture for the next few years.

Could Parking Garages Be the Next Big Thing? 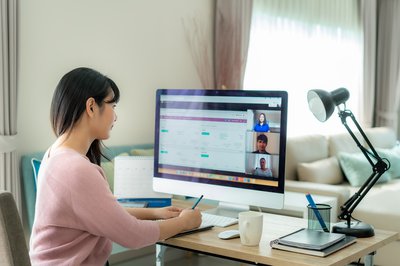 Enter the Lomad: The Future of Office Space Is Here