From Bankruptcy to Luxury Brands: Belk's Evolution Is Great News for Malls

The coronavirus crisis did a number on many popular retailers, and that extends to department stores. In fact, over the past year, shopping malls have lost numerous tenants as department stores have been forced to shutter in the pandemic's wake.

Belk, a privately held department store, wasn't exactly spared the pandemic's wrath. Rather, it was forced to file for bankruptcy earlier this year to reorganize its debt and secure new operating capital. But now, Belk has big plans to expand its product line, and that's something real estate investors should be happy about.

From financial distress to luxury brand

Belk's bankruptcy filing was unique in that it effectively emerged from Chapter 11 in only a day. Normally, the process of restructuring debt and reorganizing can take multiple months or even years, but that didn't happen with Belk. As such, real estate investors were spared the stress of having to track bankruptcy proceedings and hope for the best.

Just as importantly, following its filing, Belk came away with $225 million in new capital -- money it now has available to focus on new growth initiatives.

One such initiative is expanding its product line. In fact, Belk is introducing a new in-store concept called Sunnies at Belk that will feature designer sunglasses in several locations across North and South Carolina. The goal is to attract new customers -- including those with heftier budgets who may have their eyes on specific brands.

Belk isn't the first retailer to try out this store-in-store model. Target, for example, has a similar setup with beauty brand Ulta, and it recently launched its in-store Apple shops.

Carrying sunglasses also isn't a new concept for Belk, as it already offers eyewear from a number of well-known, higher-end brands, like Coach and Michael Kors. But its new Sunnies at Belk offering will feature even more high-end names like Gucci and Prada.

Though Belk's bankruptcy was uniquely short-lived, any news of a retail bankruptcy is enough to make real estate investors ansty, especially given the way the pandemic has hammered the sector and caused the value of many mall REITs (real estate investment trusts) to drop. But the fact that Belk has done such a rapid about-face should give investors confidence that the department store has the ability to thrive going forward.

Malls routinely rely on department stores to serve as anchor tenants, signing longer-term leases and drawing in not just customers but other retailers. Now malls are grappling with added vacancies as the pandemic forced many chains to shutter on a permanent basis, and they can't afford to lose a big name like Belk. But thankfully, it's looking like they won't have to.

And now that Belk has a pile of cash at its disposal, it may, in the coming months, seek to expand its brand even more. Belk already offers a wide array of apparel, footwear, home essentials, and decor, but if it continues to broaden its selection of luxury goods, it'll secure its footprint as a mall mainstay even more. 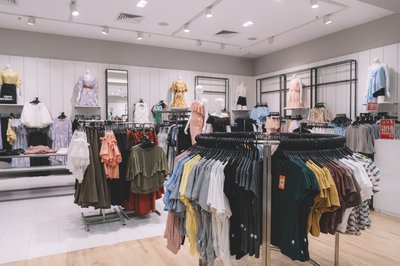