Generally speaking, real estate investment trusts (REITs) make money by charging rent. But for many in the industry, construction is a key avenue of growth. With the rising price of lumber making headlines, REITs like Federal Realty (NYSE: FRT) and AvalonBay (NYSE: AVB) have weighed in on the matter. It's a big problem, or maybe not as big as another growing point of strain.

Federal Realty is, at its core, an owner and operator of strip malls and mixed-use shopping centers. One of the key avenues of growth for the REIT is through the upgrading of assets it owns. For example, it recently bought a 90,000-square-foot shopping center in McLean, Virginia, anchored by Safeway and Rite Aid. The property has below-market rents and is only around 83% leased, but the goal is to add value to the property by improving the asset.

What that means at this point is something only management knows, but it basically hints that there are construction plans on the drawing board. But during Federal Realty's first-quarter 2021 earnings conference call, CEO Donald Wood stated that construction prices, "are absolutely, at this point in time, out of control." This probably won't impact upgrading plans at the new Virginia asset, but it could be a big issue at some of the REIT's mixed-use assets, in which apartment projects are a key part of the plan.

Wood went on to note that "clearly, supply chain of materials has been completely disrupted in the last year globally, and that impacts prices. So we have to see where that will go." If the REIT can't make "the numbers work" with regard to construction costs, it may end up pulling back in some areas, notably apartments. That's hardly the end of the world for Federal Realty, since apartments only make up around 11% of its rent roll. But it could disrupt, or at least delay, some of the REIT's plans for its assets, and that impacts the investment returns it can achieve over time.

That said, Federal Realty's focus on the supply chain, likely driven in large part by things like lumber, may not be the biggest issue to watch. Apartment REIT AvalonBay went into a little more detail about its construction plans, which have long been a key contributor to the company's growth. Lumber is, indeed, an issue, but during AvalonBay's first-quarter 2021 earnings conference call, Chief Investment Officer Matthew Birenbaum went into some detail that's important to understand.

According to Birenbaum, roughly 15 to 20 cents of every dollar spent on construction is tied to the land. Another 15 to 20 cents goes toward "soft costs," which includes things like permits and architectural fees. That leaves around 60 to 65 cents that is directly related to construction. However, of these costs, only around a third is driven by materials, like lumber. The remaining two thirds is labor. This is back-of-the-envelope math, of course, but around 20 cents per dollar is construction costs and 40 cents is labor. So if you look at the rough breakdown here, labor is about twice as material as any of the other costs.

In Birenbaum's view, lumber costs could double and it would only increase overall costs by 2% to 3%. That's not insignificant when you're dealing with million-dollar projects, but his bigger concern is labor. Labor costs, meanwhile, are likely to be stickier than supply- and demand-driven lumber prices. AvalonBay isn't planning to stop construction but notes that its expected returns might come down a touch (think 25 to 50 basis points) because of rising lumber costs. Far from the end of the world, but it does potentially make decisions a little bit more difficult when projects are competing for internal capital. And it could easily tip the scale from building to, instead, buying an already built asset.

As an investor in REITs, construction costs aren't something you can really dig into very deeply. However, AvalonBay's breakdown was incredibly helpful in providing a broad framework. Right now it seems like rising lumber costs aren't likely to be a huge headwind for most REITs, though if you add rising labor costs to the mix, ground-up construction could quickly become more difficult to justify. The question, however, may actually come down to how long these headwinds last since building an apartment is a multi-year process. In other words, investors in REITs with material construction plans should be worried about costs, but they should probably be more worried about how long costs remain elevated.

There's a very real chance that you start to see REITs pivot toward acquisitions over building if costs remain "out of control" for an extended period of time. While that won't turn AvalonBay or Federal Realty into bad investments, it could notably alter the way in which investors have to think about their growth plans. 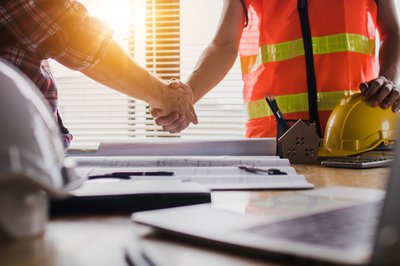