If you live in or visit a city with lots of high rises, like the Big Apple, you'll probably walk through a construction shed or two. If you're not familiar with the term, construction sheds are those hideous structures of scaffolding built to protect pedestrians from falling debris at construction projects. Pedestrians walk through them like rats in a maze. Maybe since construction signals progress, the public puts up with them. But that might be changing, as people realize there could be a better way.

The grandest scaffolding project of all: Citrovia

Developers have been trying to make those necessary scaffolding tunnels more palatable to the public. They've painted the metal poles, put colorful murals around them, and have basically tried to camouflage these monstrosities. All commendable pursuits, but at the end of the day, pedestrians still need to walk through those dark and often creepy sidewalk sheds.

Enter Citrovia, the brainchild of management at Brookfield Properties' (NYSE: BPYPO) Manhattan West project, an eight-acre, mixed-use development in the Hudson Yards district. Citrovia's a giant construction shed that's 40 feet high and has become something you're more likely to see at Disneyland. In fact, Adirondack Studios, a firm that makes Disney attractions, is responsible for Citrovia, a fantastical, whimsical lemon-themed garden extravaganza as large as a football field.

Rather than scuttling through a pipe- and plank-filled maze, pedestrians can have an enjoyable experience, relax, and smell -- in this case not the roses -- but piped in lemon-scented perfume. Or they can simply use the area to meet up with friends to take a really fun Instagram shot.

The scaffolding industry is booming. Worth about $50 billion in the global market in 2020, this industry is projected to reach almost over $70 billion by 2027. In the U.S., the scaffolding industry was worth $13.7 billion in 2020. Safety is the first order of business for this industry, but making these structures fit into the environment rather than being massive eyesores is taking hold.

There's no readily available information regarding how much developer Brookfield spent on Citrovia, so you've got to figure it's a "if you have to ask it's too much" type of situation. But Citrovia isn't meant to be the only or even the preferred solution to beautifying space occupied by ugly scaffolding. There are other exciting plans swirling around, such as the ones by these companies:

Although you'll see scaffolding in many construction projects across the country, nowhere in the U.S. is scaffolding so pervasive and longstanding (up sometimes at one location for years) as in New York City. That's because of Local Law 11 that requires buildings over six stories to be inspected every five years. Rather than put up and take down the scaffolding, which involves time and money, some building owners opt to just leave it up. 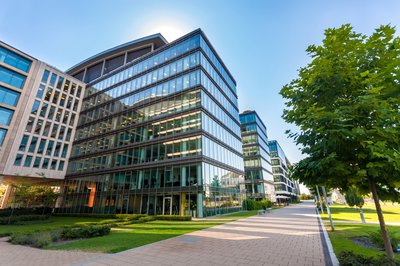 Are Sustainable Buildings the Next Big Opportunity for Investors?

Is Biomorphic Urbanism the Green Wave of the Future?

What Is BREEAM Certification for Real Estate?