Las Vegas Is Back and Blackstone Knows It

A couple of weeks ago, a friend of mine who was on a cross-country road trip called me frantically from her car. She couldn't find a room for the night in Las Vegas. After a few searches, I found her a room after wading through search results showing sold-out rooms and ridiculously high prices.

The Las Vegas resurgence that I first heard about when talking to Ed Pitoniak of Vici Properties a couple of months ago seems to have arrived. Leisure travelers are back in full force. The May numbers from the Las Vegas Convention and Visitors Authority were pretty resounding. There were over 2.878 million visitors in May, up a whopping 1,802.3% from last year. Revenue per available room (RevPAR) is up by over 10,000% around the Las Vegas Strip area. The visitor number is still nearly a million off the usual number of tourists, but once conventions are scheduled, it seems likely that traffic number will return.

The rejuvenation of Las Vegas is also happening on the Strip itself. Genting Resorts recently opened Resorts World Las Vegas, a $4.3 billion venture, which is the first major Strip property to open in over a decade. Nearby, the massive project that was to be the Fontainebleau Las Vegas has rebranded as The Drew Las Vegas, although the opening still looms at some indistinct point in the future.

Where there is opportunity, there is often Blackstone Group (NYSE: BX). In recent weeks alone, we've watched Blackstone strengthen its position in two other massive growth trends. It is buying QTS Realty Trust, capitalizing on the huge appetite for data and, by association, data centers. During the last financial crisis, it saw the potential in single-family rentals, and it's back in that world, picking up Home Partners of America for $6 billion.

In January 2020, Blackstone announced that its Blackstone Real Estate Income Trust, a public non-traded REIT (real estate investment trust), was forming a new joint venture with MGM Growth Properties (NYSE: MGP) to buy the Las Vegas assets of the MGM Grand and Mandalay Bay for $4.6 billion. Blackstone had already purchased the Bellagio in October 2019, for $4.25 billion.

On July 1, 2021, it made another big move snapping up two more Strip properties. Funds managed by Blackstone will own the real estate of the Aria and Vdara resorts and then lease them back to MGM Resorts. Blackstone will pay $3.89 billion in cash, and MGM Resorts will pay an initial annual rent of $215 million. MGM Resorts will spend $2.13 billion to buy out Infinity World Development Corp.'s 50% interest in the CityCenter project.

These moves, plus its earlier acquisition of the Cosmopolitan resort, give it a massive presence in Las Vegas -- and it may not be done yet. One of the biggest themes we are seeing along the Las Vegas Strip right now is consolidation. Earlier this year, VICI Properties bought The Venetian Resort to add to its portfolio that includes the Caesar's Palace properties in Las Vegas. Another sign of future activity on the Strip may be the fact that CBRE has acquired Union Gaming, a Vegas-based company that offers investment banking services, mergers and acquisitions, and strategic advice. CBRE is already active in the market; Union Gaming just adds to its firepower.

The takeaway for REIT investors

When Blackstone has an investing thesis, it's always interesting to look at ways other investors can participate. Blackstone's interest in Las Vegas is a long-term bet on the strength of the city as a tourism and convention destination.

Keep an eye on VICI Properties and MGM Growth Properties. Both are trading at all-time highs, partly because of the way the market has been favoring hospitality REITs since the first vaccines were announced. However, there may still be plenty of room for growth over the long haul, and given their high-quality gaming tenants, these two REITs will likely continue to deliver strong dividends for years to come.

Deidre Woollard has no position in any of the stocks mentioned. The Motley Fool recommends MGM Growth Properties (Class A). The Motley Fool has a disclosure policy.
FREE - Guide To Real Estate Investing 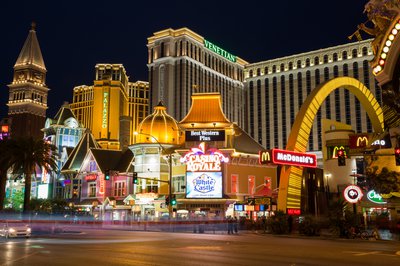