Massive private-equity firm KKR has decided to purchase a mixed-use building in San Francisco, consisting of office and life science space in the Mission Bay area. KKR is purchasing the property for $1.1 billion and just obtained a $600 million loan from Goldman Sachs (NYSE: GS) and JPMorgan Chase (NYSE: JPM) to help fund the purchase.

Here's a rundown of the building KKR is buying, why the company is likely not at all worried about collecting rent for the foreseeable future, and what it means to real estate investors as a whole.

The building, known as The Exchange on 16th, is most notable because it's the headquarters of file-sharing technology company Dropbox (NASDAQ: DBX), which leases more than 98% of the space in the building, totaling 738,000 square feet. KKR is investing nearly a half-billion dollars of its own core-plus real estate investment capital in the deal.

Dropbox announced it will transition to a "virtual first" workplace model after the pandemic. So at first glance, this might sound like a risky investment for KKR. However, there's little reason to worry about the company's ability to pay rent.

For starters, Dropbox has paid its rent throughout the pandemic. Another thing that KKR likely finds appealing about the deal is that Dropbox's lease has nearly 13 years left on it, so the firm can count on steady, growing rent payments through at least November 2033. And while a virtual-first workplace won't require nearly as much space as Dropbox needed previously, in order to adapt to its lower space needs in the post-pandemic world, Dropbox has been actively trying to sublease portions of the property.

It doesn't look like there's any shortage of demand, especially from the booming life science industry. Dropbox has already subleased about 186,500 square feet to two separate biotech firms. The building was initially built as a life science office building before Dropbox decided to lease the space, so it's a natural fit.

What's more, reports indicate that the life science office market is very tight in San Francisco, so it's doubtful Dropbox will have much trouble subleasing whatever space it wants to.

What it means for investors

On a more general note, this transaction is just the latest in a series of positive news items for the office real estate market. In recent weeks, several major technology firms, including Salesforce (NYSE: CRM), have announced plans to accelerate their office reopening plans. And in a recent Fool.com interview, Wix.com's (NASDAQ: WIX) COO said that he sees tremendous value in working in office environments.

It's also worth noting that the two companies helping to finance the purchase, Goldman Sachs and JPMorgan Chase, have also recently expressed that their employees will be returning to offices after the pandemic.

While office space requirements may indeed change a bit and companies will make adjustments (like Dropbox's recent sublease of part of the just-acquired building), this transaction shows a tremendous amount of confidence in the long-term investment case for urban office real estate by one of the largest, most respected private equity firms in the market. 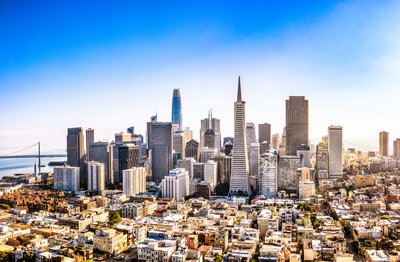 Tech Workers Are Flocking Back to the Bay Area: Time to Invest There?